What is the Law of Supply? 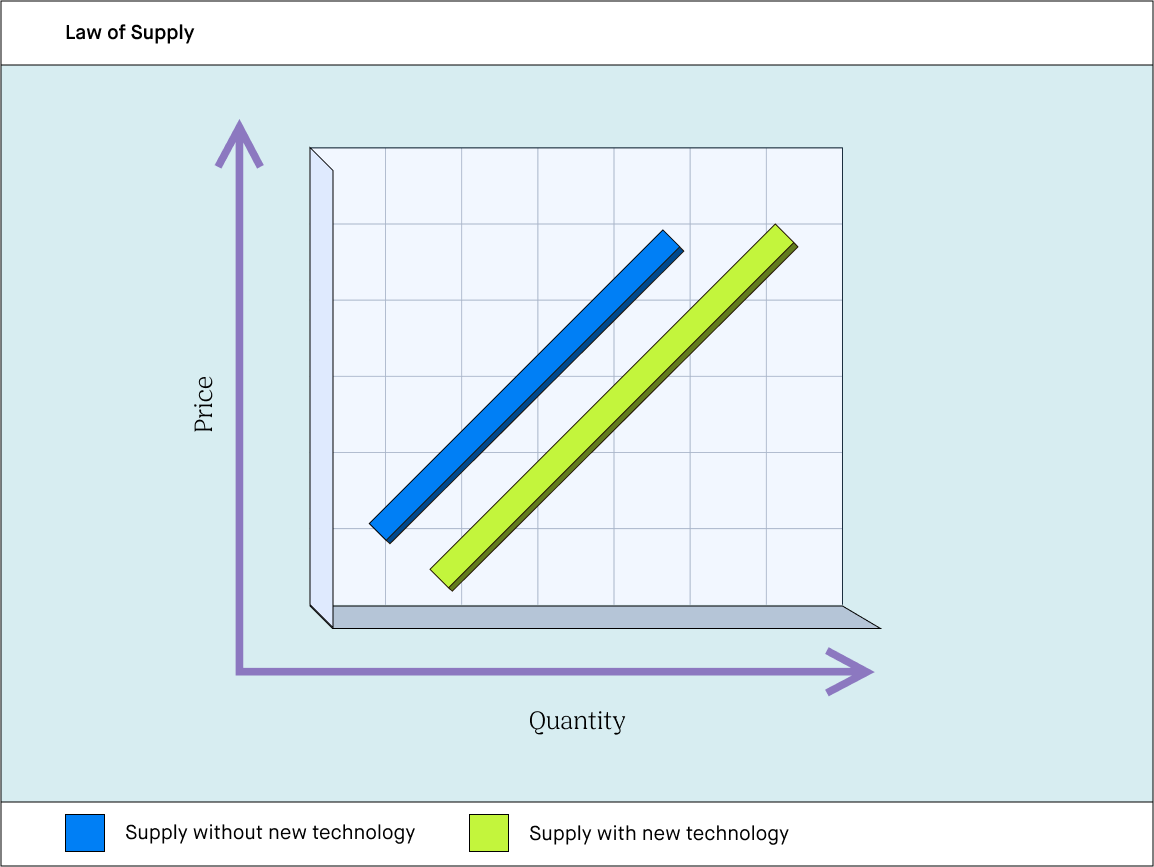 🤔 Understanding the law of supply

The law of supply states that a company will react to higher market prices of a good by increasing its production. A company looking to maximize profit will use its lowest-cost options first. When it produces more goods, it will need to pay more in production costs (assuming other factors are equal). To justify the increase in production, the company must raise the price. When you plot it on a graph, the relationship between the price of a product and the quantity produced looks like a line that slopes up (aka the supply curve). This shows you how the price and quantity of a product move together. The law of supply, combined with the law of demand, describes the foundation of all economic activity.

If you’ve ever worked a lemonade stand, you’ve probably used the law of supply. First, you take how much you spend to make one pitcher of lemonade — The cost of lemons, water, sugar, cups, and ice. Then you take the number of cups you can sell out of each pitcher of lemonade. You divide the cost of goods sold by the number of cups, and you get the cost per cup. In order to make a profit, you want to sell each cup at a price that is higher than what it cost you to make it.

If you can’t charge enough to cover those expenses, plus your opportunity cost (how much you value the thing you would be doing if you weren’t selling lemonade), it wasn’t worth doing. And, if you were going to stay out there selling for an extra hour, the money had to be even better.

At first, it’s easy. You walk around the tree and pick the low-hanging fruit. But eventually you run out of apples on the lower branches. In order to get more, you have to get a step stool to help you reach the higher branches. As you pick more apples, you have to climb higher, exerting more effort. This is how the law of supply works. Increasing production requires increasing effort, and cost.

Who invented the law of supply?

The laws of supply and demand were first described in philosophy. The original idea is often credited to John Locke's work back in 1691, but Locke didn’t coin the terms “supply” or “demand.” That honor goes to Sir James Steuart, who applied the principles to trade nearly a century later, in his work Inquiry into the Principles of Political Economy. Adam Smith formalized the discipline of economics in 1776, with the book The Wealth of Nations.

Finally, Alfred Marshall refined the study of the economy in his work Principles of Economics, which introduced the supply and demand curves. Marshall is often credited for creating the laws of supply and demand, but he stood on the shoulders of giants.

Let’s say you run an oil company and you’ve just discovered a cheaper way to produce oil. Now you can produce more oil for the same cost, and you can sell more oil at the same price. You’ve just created a change in supply.

That’s different from a change in the quantity supplied. If companies increase production in response to a higher price, that is just the law of supply at work. The fundamental relationship between the price of oil and the willingness to provide it has not changed. In this case, price and quantity move along the supply curve, altering the quantity supplied without changing the supply.

For example, if you own an oil field in Texas, you control the amount of oil you bring to the surface. When prices rise, you might increase that output. This leads to a change in the quantity of oil you supply. If a new technology comes along and lowers the cost of production, you may not need to withhold oil output as much when the price falls. That leads to a change in supply.

The supply curve shows how the production volume of a good or service changes with its price. As the price of a good goes up, so does its supply, and vice versa. But other factors can affect supply. If the underlying cost of manufacturing a good or service changed, for example, the entire price-quantity relationship would change, too. This concept is known as a shift in supply.

What assumptions make the law of supply work?

The law of supply operates on the premise that businesses seek to maximize profits. Under this assumption, a company tries to get the best deal from its vendors to make its product. The idea is that the company exhausts its best options first. As the company increases the quantity of goods it produces, it may exhaust the best vendor’s supply and move on to the next best option. Those next options will cost more — Since the cheaper option was already likely used.

Let’s say you run an apple cider business. You’re looking to buy apples, so you go to a supplier and make them your best offer. The supplier refuses, so you offer them more money. That’s the law of supply in a nutshell. The more you’re willing to pay for a product, the more of it a seller will be willing to provide.

What are the exceptions to the law of supply?

It’s good to keep in mind that the law of supply is a theoretical concept. In the real world, there are certain exceptions. Think about a time when you bought something in bulk. If the price of a product increases with higher volume, why do companies offer a discount when selling in bulk quantities?

The answer has to do with the difference between the average cost to make a product versus the incremental cost. The law of supply assumes cost to mean the additional cost of production (in economics jargon, “marginal cost”). But if a business can increase production using spare capacity, and therefore produce the same quantity at the same cost, a business can improve efficiency.

Let’s say you need to produce 1M bottles of cider, so you build a bottling factory. The cost of the factory is spread over one million units. Now let’s say that by running those machines longer, the same factory can produce 2M bottles of cider. Those initial building costs are now spread over 2M units. Even if you have to spend more per apple to increase output (aka increase the marginal cost), you might see the average cost per bottle of cider go down.

Another issue comes up in real-world applications — An increase in production cost is not always obvious. For example, if you run a hamburger stand, the cost of ingredients required to sell one hamburger appears to be the same as the next. That’s generally true, but there’s a limit to the number of burgers you can produce using a finite set of materials, labor, and equipment. At some point, increasing production will require spending more money.

A third exception to the law of supply is what’s called the agency problem. In theory, businesses are efficient and maximize profits. In reality, people run companies, and people do not always optimize company profits. A manager might choose a more expensive vendor for personal reasons, for example, or because they don’t know that a cheaper competitor exists. Figuring out the most optimal choices may also cost more in time and resources than it would save.

Pro bono is an abbreviated Latin phrase used to describe when a professional offers their services for free or at a highly discounted rate.

Consignment is a business relationship where one party agrees to sell an item on behalf of another party for a fee.

Buying on margin means borrowing money from your broker to purchase securities.

An estate includes all of the things that a person owned when they died, including cash, investments, property, and other goods.

What is Keynesian Economics?
Updated June 18, 2020

Keynesian economics considers demand to be the driving force in an economy and argues that governments should take action — such as spending money and cutting taxes — to stimulate the economy in a recession.

Deflation is the decrease in the price of goods and services over time, which results in an increase in the purchasing power of a currency.