What is the Cost of Goods Sold?

Cost of Goods Sold (COGS), is how much a company spends to directly create a product or service – The calculation? Beginning Inventory + Purchases During the Period - Ending Inventory. 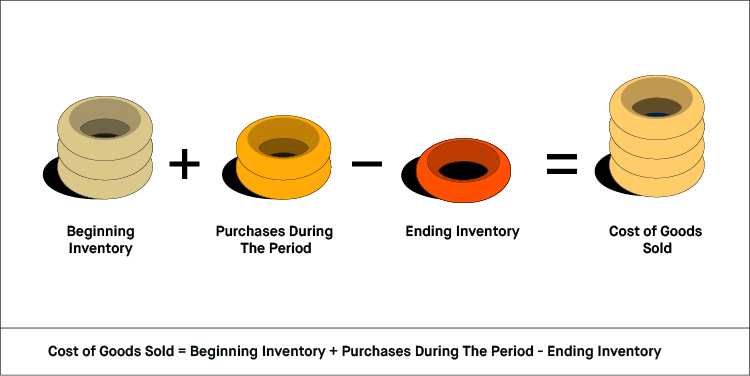 Cost of Goods Sold (COGS) is what it costs to produce the goods or services offered by a company. Subtracting the cost of goods sold from sales results in gross margin, sometimes called gross profit. That gross profit is the difference between a company’s revenue and what’s known as “variable” costs, expenses that vary based on how much the company produces, expenses like direct labor, equipment, and credit card fees for processing customer transactions. It’s important to note that not every expense associated with producing a product is part of COGS. Expenses that are considered “fixed costs,” and don’t necessarily vary based on the volume of goods created, such as advertising, insurance, salaries for employees, or office rent, are not reflected in COGS or in gross profit.

For the 3-month period ended June 29, 2019, Apple reported revenue of some $50 billion, coming from the sales of iPhones, MacBooks, and other products. The “variable costs” to create the iPhones and MacBook Airs, such as direct labor, materials, commission for sales staff, shipping, etc., cost $30B. We call this $30B the “cost of goods sold.” (Source: Apple, 07/30/2019) Other businesses, say a pure retailer, such as Walmart or Target, tend to have a higher COGS compared to Apple or Dell, because they’re buying in what they sell and so all the R&D and other production overheads are now included in COGS.

Cost of goods sold is like that saying in the westerns – it’s what a company’s got to do...

It’s the expense required to produce the goods or services the business offers. Without these direct costs, a company wouldn’t be able to create the source of its revenue - There’s no way around it. COGS is often seen in calculations for gross margin, which is net sales minus COGS. Gross margin doesn’t account for “fixed costs,” like insurance or advertising, but it does account for the direct costs of making the product.

How do you calculate COGS?

The easiest way to determine COGS is to reference a company’s income statement — You’ll almost always find it there. To calculate COGS from its components, you’d count up the value of the goods you started with: all the raw materials and finished goods in stock, aka inventory. Then, you’d measure the value of everything that was purchased, and then subtract what you have left at the end of the year, such as raw materials and stock. What remains is the cost of the goods you sold that year.

The formula for COGS is:

While larger companies reflect larger inputs, the equation remains the same. For publicly traded companies (usually only those for publicly traded companies are publicly available) the COGS is typically reported in the first few lines of the corporate income statement. (If you’re interested in finding the gross profit margin, everything that can be spent on other needs than just making and selling the product, simply subtract the COGS from revenue.)

How is COGS used in accounting?

There tend to be two main ways that the cost of goods sold can be used in accounting. The first is by business leaders and analysts, who use it as a tool to help ensure a good is priced at market price – Companies need to know how much it costs to create something before they sell it. What are the direct costs and direct labor used to make the goods? Do these costs exceed revenues generated from selling the goods? To be profitable, the cost to produce the goods, including the direct costs associated with producing the goods, such as material, its direct labor, and overhead costs such as, for example, accounting fees or insurance costs, must be less in total than the value of sales.

Management of a company can also use COGS as a tool to help identify how to make its business more efficient and profitable. If management can find ways to lower cost, for example, by finding a different supplier for a part of the product, the business can help increase net income, the difference between revenue and the COGS.

How do investors use COGS?

Investors tend to use COGS as a tool for analyzing gross margin, the income that remains after the costs of goods sold is subtracted from sales. Why? Gross margin is an asset that companies can use to help grow their business, whether through investments in research and development (R&D), or on other costs such as marketing spending or some employee salaries. In general, high gross margins mean the company has greater choice over the price it charges for a specific good. The business can then use this margin to spend in an effort to position itself more strategically against its competition. Similarly, higher net income can sometimes also enable a company to spend more on stock dividends.

What’s the difference between COGS and expenses?

Cost of Goods Sold (COGS) is a category of expenses. COGS is a specific set of expenses that’s related solely to producing the goods that a company has sold. Meanwhile, expenses also include taxes, general overheads, research and development, and so on.

There are three main ways to value inventory when it comes to calculating the Cost of Goods Sold (COGS): Last in first out (LIFO), first in, first out (FIFO), and average cost (AVCO)

Using LIFO, you’d use the price of the latest good purchased or produced first to determine COGS. This means expensing the latest purchased or produced goods first while leaving old inventory costs on the balance sheet. LIFO is helpful as a management tool to match the revenue derived from the sale of goods with the more recent cost of purchasing or producing those goods.

FIFO is first in, first out inventory valuation. The benefit of FIFO is that it can help a company ensure the remaining inventory balance on its balance sheet reflects present market value. If companies are always expensing using LIFO and costs keep going up, then what sits on their books is cheaper costs, which can leave a business with a skewed perception of its assets. Average cost method should be evident in context. It takes the average cost per unit of your stock over time and applies that as the valuation rate for COGS.

Cost of Revenue Versus COGS?

Operating expenses, often referred to as “Opex,” are overhead costs associated with running your business, such as administrative salaries, rent on head office, general utilities, and telecoms expenses. What isn’t part of COGS includes:

The main limitation of COGS is that it’s a temporary snapshot of your business at one moment in time. It doesn’t tell you how much is being invested in the future of the product or the company. It’s also not an evaluation of how much should be invested down the line – It’s purely a measure of how much it costs to create your product right now.

What are limitations of COGS for investors?

Investors and analysts are interested in the difference between the cost of goods sold and revenues because that’s where potential profits reside – dividends, stock yields, stock values, etc. Once this difference, called gross margin, is calculated, it’s important to see how it’s distributed across different types of expenses, such as dividends, research and development (R&D), and overheads. Several of these may include dividends, creating the future through R&D, and even overhead costs.

COGS is only one metric that helps investors and analysts evaluate the performance of a company and other investments. If the costs of goods sold is close to gross revenue, the company will likely have minimal gross margins or gross profits. This means the business could be vulnerable to a small change in prices, for example, if profit margins are so narrow that they get wiped out by costs.

In general, analysts and investors like to see low COGS relative to sales because it tends to mean the company has more funds to spend on either developing the business for the future or paying shareholders profits as dividends.

What is an Income Statement?
Updated September 09, 2020

Accruing is accumulating something, such as interest or expenses, over time — it is a term often used in accounting and other financial discussions.

A secured credit card is a credit card where you provide a security deposit, and the card issuer bases your credit limit on that deposit.

Pari-passu is a Latin term that means “on equal footing” and means that various parties in a financial arrangement have equal rank and rights of payment.

Estoppel is a legal concept that protects people from loss from actions that they took based on promises another party made but refused to follow through on.

What is an Investment Company?
Updated September 23, 2020