Generally accepted accounting principles (GAAP) are a commonly followed collection of guidelines — both set by policy boards and adopted by general practice — that organizations use in reporting their financial numbers. 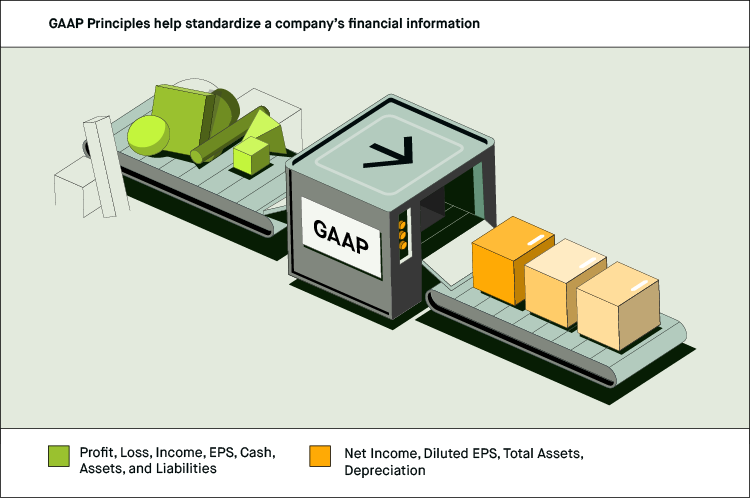 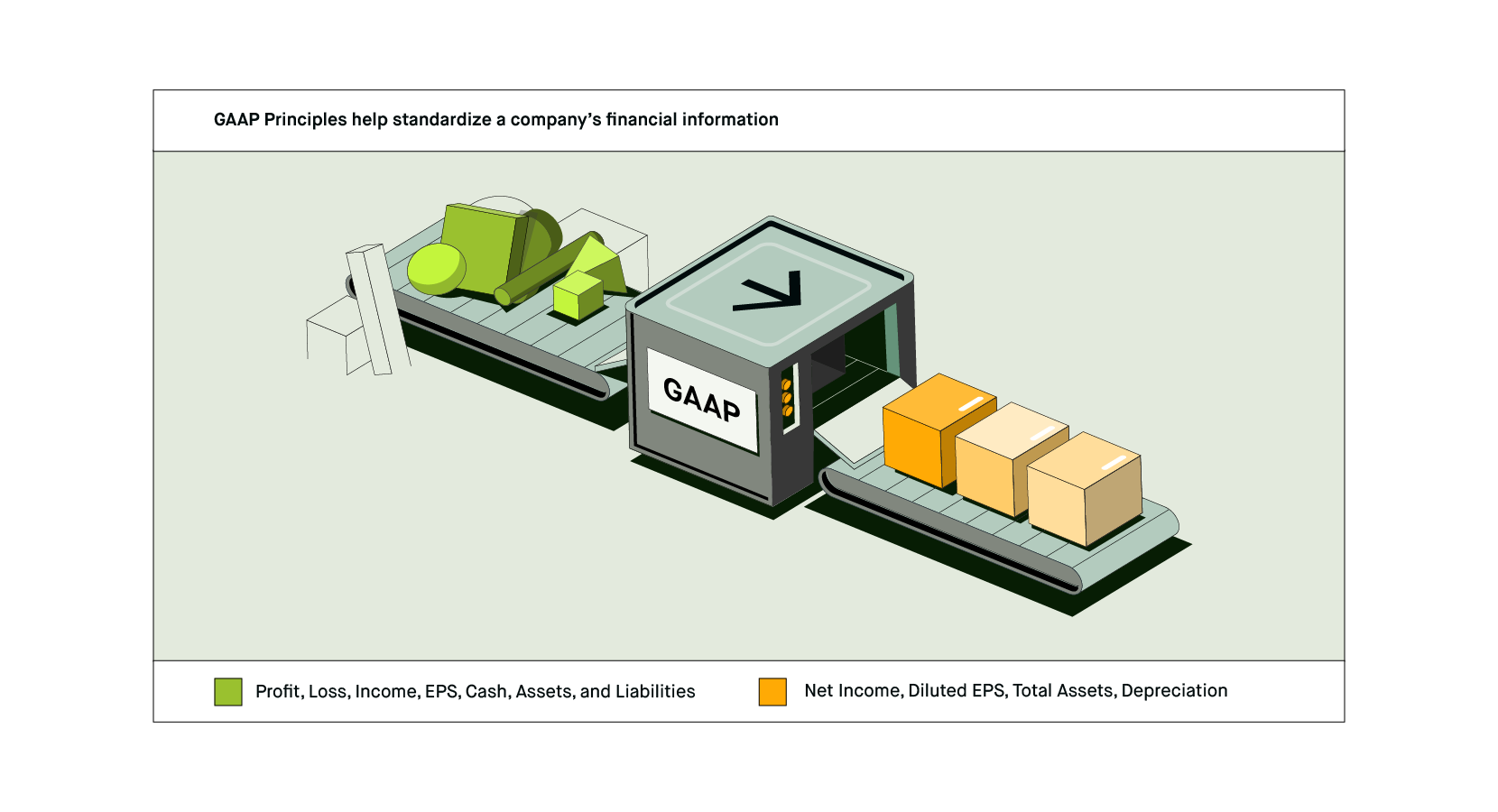 Generally accepted accounting principles (GAAP) are a commonly followed collection of guidelines used to report a company’s financial information. The purpose of GAAP is to make the reporting of a company’s finances transparent and uniform. In the United States, all publicly listed companies or organizations that report their numbers to the public must follow GAAP guidelines. They must include three important financial statements: The balance sheet (what the company owns and owes), the cash flow statement (the money coming in and going out), and the income statement (the money it makes). GAAP enables investors to compare a company’s performance across different industries and years. It also aims to protect investors’ interests.

Let’s look at a real-life example and peek into Microsoft’s income statement for the fiscal year ending on June 30, 2019.

The net income (aka "bottom line") is the final line in an income statement. According to disclosures in Microsoft's income statement, the difference between GAAP and non-GAAP net income comes from a $2.6B tax benefit and a net income tax charge of $157M. Tax benefits are considered in GAAP, while they are excluded from non-GAAP. So, the net income is different depending on whether a GAAP or non-GAAP measure is used.

GAAP is like the grammar of financial reporting. Grammar enables us to understand better and communicate clearly. Similarly, GAAP provides a common structure to financial statements, and gives investors a base to evaluate and compare financial information.

Grammar is the foundation of any language. It also enables us to understand it better and communicate clearly. Similarly, GAAP guidelines provide a common structure to financial statements, establishing consistency, and giving investors a base to evaluate and compare financial information from different companies.

GAAP guidelines are set by the Financial Accounting Standards Board (FASB) and are a part of the Accounting Standards Codification (ASC). GAAP is recognized as an accounting standard by the Securities and Exchange Commission (SEC) — The highest government agency in the U.S. that is in charge of protecting investors and creating laws for the financial markets.

In addition to the balance sheet, cash flow statement, and income statement, GAAP also requires companies to reveal any information that may impact their business. These are called disclosures. For example, in Apple’s annual report for the fiscal year ending September 29, 2018, the company had to state that a 1% increase in interest rates would result in a decline of $6B in the value of its portfolio. This disclosure was a part of a “sensitivity analysis” that companies generally perform.

What are the 10 GAAP principles?

What are the three rules GAAP is built upon?

Despite GAAP guidelines, accountants may find loopholes and report the company's numbers in a favorable light to gain an advantage. This tactic is called creative accounting. To limit it, GAAP has three rules in addition to its ten principles.

What’s the history of GAAP?

The American Institute of Accountants (AIA) used the term ‘GAAP’ for the first time in 1936. The AIA set up the Committee on Accounting Procedure (CAP) in 1939, which established accounting rules. Eventually, in 1972, the FASB introduced GAAP the way we know of it today. The FASB updates and supervises GAAP even today.

Non-GAAP measures are like the side dish served along with your main order — You did not ask for it, but you are happy to get it, and it somehow makes the meal complete. Ninety-seven percent of the companies in the S&P500 include both GAAP and non-GAAP metrics while reporting numbers. If an accountant adds or deletes something from a comparable GAAP number’s calculation, it will become a non-GAAP number.

Some non-GAAP figures may be adjusted to represent an accurate picture of a company's finances. That's why non-GAAP numbers are usually called 'adjusted.'

Here’s a real-life example of non-GAAP accounting. According to Uber’s financial statement for the quarter that ended on March 31, 2019, it generated a revenue of $3.09B (GAAP number). Uber also published its ‘Adjusted Net Revenue’ (a non-GAAP comparable number to revenue).

Organizations have to explain the reason for a difference in GAAP and non-GAAP numbers, which they generally do in their financial statements. Uber reported Adjusted Net Revenue to inform its investors how changing drivers’ incentives would impact its revenue.

International Financial Reporting Standards (IFRS) is an accounting standard used in more than 110 countries, such as Canada, China, Australia, and members of the European Union. GAAP is used in the United States.

In general, GAAP is a more rules-based accounting system; IFRS is a more principles-based system. In GAAP, accountants have no scope to interpret rules; while IFRS allows accountants to use their judgment.

What are the limitations of GAAP?

GAAP aims to reduce incorrect financial reporting and protect investor interest, but it still does not guarantee that a company's reported finances are entirely error-free. With companies becoming globalized and IFRS (International Financial Reporting Standards) being the international standard, investors and businesses around the world may face problems while reporting and comparing GAAP and IFRS numbers as they are calculated differently.

What are some references for the tools of GAAP?

GAAP’s regulatory bodies have useful information on financial reporting. You can check it out here:

A signature loan is a type of personal loan where the borrower doesn't provide collateral, offering just their signature as a sign of their intention to pay the loan back.

Going public is when a private company sells shares of company stock to members of the public as part of an Initial Public Offering (IPO).

Delta (Δ) represents the sensitivity of an option’s ’s price to changes in the value of the underlying asset.

Equilibrium is the market price at which there is an equal number of willing buyers and sellers, usually denoted as the intersection of a supply curve and demand curve.

Buying a put option means opening a contract that gives you the right, but not the obligation, to sell shares of a stock at a certain price (the “strike price”) up until a set date (“expiration date”).

Average true range (ATR) is a measurement of market volatility that helps traders understand how far an investment’s price typically moves over the course of a day or other period.