What is an Exchange Rate?

An exchange rate is the value of one currency compared to another, expressed in the units of that other currency, usually that of another country. 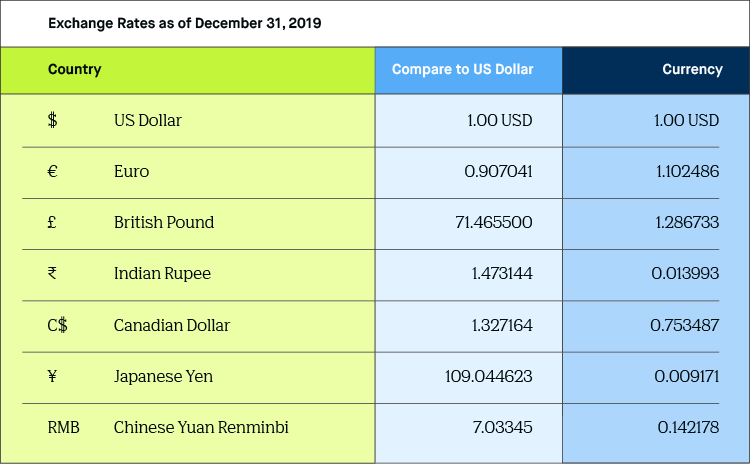 The US dollar is the currency of the United States, the pound that of Britain. If you want to trade in dollars to pounds there's a market price for how much you’ll get. In other words, the exchange rate is the price that people will offer you in pounds for your dollars. This foreign exchange market is the world's largest market by far, where a trader can exchange one country's currency for another. Bank for International Settlements estimates put it at over $6.6 trillion per day globally (https://www.bis.org/statistics/rpfx19_fx.pdf). The vast majority of foreign exchange trading (forex) is to try to profit from price mismatches (this is what “arbitrage” means), and price movements (this is what “speculation” means) and a very minor portion is people needing to have that foreign currency to purchase real world goods.

Say that you’re traveling from the US to England. You have US dollars to trade for GB pounds. The local currency is the pound, and that's what you need to spend in the stores. You have US dollars, so you need to exchange some dollars for pounds. The rate at which everyone is happy to make that swap is the current exchange rate. Say, for example, 1 pound costs 1.24 dollars (correct on 09/12/2019). The exchange rate is thus £1:$1.24, or 1.24. We can also invert this to get the $/£ ratio, 0.81 on the same date.

There are at least 195 countries in the world and most, but not all, (think of the European countries sharing the euro), have their own currency. The foreign exchange markets (aka forex markets ) facilitate swapping monies belonging to different currencies with each other. The exchange rate is the price at which one country's currency is sold for another. The exchange rates we see are just the price at which a local currency is sold for a foreign currency.

What is the definition of an exchange rate?

An exchange rate is simply the price at which you can exchange one thing for another. It could be the value of the U.S. dollar to British pounds, or Euros to Yen, or the Nigerian Naira to the Bangladeshi Taka.

It's simply the ratio of one currency to another, that represents how many units (dollars, pounds, etc.) you can buy of a foreign currency with one unit of your own.

How is exchange rate calculated?

An exchange rate is a price ⁠of one currency compared to another— It's a ratio of how much of one you can get for the other. In one sense, there is no calculation of an exchange rate ⁠— It is just like the price of apples.

At another level, an exchange rate is always calculated in another country's local currency. That's what the price itself is: that rate at which local currency can be exchanged for, say, the US dollar.

The standard is to use the local currency as the benchmark. For example, the US dollar to Pound sterling rate is one dollar buys 0.81 pounds (09/12/2019 rates). For someone holding the Pound, the exchange rate is calculated in reverse and would be 1.24, meaning it takes $1.24 to buy one GBP.

How is an exchange rate determined?

How is that price reached? That's the interaction of thousands of brokers trading in foreign exchange markets. They are acting on behalf of hundreds of thousands, perhaps millions, of importers, exporters, tourists, speculators and so on. Through the markets, we're recording the transactions of people buying and selling, often in real-time. That price is the average foreign exchange rate at which they're doing it. And when enough people make trades at different rates than the current average, the rate changes.

The only determination of an exchange rate is the recording of the prices at which people are actually trading currencies. The FX rate is, therefore, an output of the market activity, nothing else.

What are different types of exchange rates?

The world used to have mostly fixed exchange rates. The £/$, rate, for example, was 2.40 (or -.4166 for $/£) for roughly three decades. This was part of the general planning of the international economy after WW II known as the Bretton Woods system.

Before that, most currencies were tied to the value of gold. This was known as the “gold standard.” Since the 1970s, most rich countries have had floating exchange rates. This means the value is, as above, just the price at which people are willing to buy and sell today.

Some countries still have fixed exchange rates – The Hong Kong dollar is “tied” to the US dollar at an exchange rate of HK$7.83 / US$1. This means that the Hong Kong government agrees to buy and or sell any amount of their own country's currency at that rate.

If everyone believes the government will always buy and sell at this rate, then it should be the exchange rate for everyone. No one would pay more for the Honk Kong dollar, knowing that they could get it from the government for cheaper.

However, the belief is important. No government has unlimited amounts of money, and, as a whole, the market always has more. So, having the government (or its central bank) in the market as a buyer and seller at a fixed price works to stabilize the price. But only as long as all believe that they’ll continue to buy and sell at that price. Once the belief is lost, that tidal wave of the market’s greater firepower will overwhelm the ability of the government or central bank to set the course.

This is how George Soros, the American financier, broke the Bank of England ⁠— By selling more pounds than the bank could possibly buy. He made a billion dollars doing that.

What is the difference between nominal exchange rates and purchasing power?

The idea here is to compare the quantity of physical goods or services you can buy in a country for one unit of the local currency. Not the value of money, but how many hamburgers (one estimate of this from The Economist really does use the McDonald's Big Mac to compare PPP), or cars, books, etc., can you get for one unit of local currency? This purchasing power rate often differs from the nominal rate.

Economic theory tells us that the nominal exchange rate should trend, that is move, toward the “purchasing power parity” which is where the one unit of currency buys the same amount of stuff in every country.

While the theory's sound, it sure has been a long time coming. For nominal rates and purchasing power rates can and do differ by tens of percents for many years. There is rarely a situation where goods are truly identical, and transport costs are exactly the same. For these reasons, among others (such as local supply and demand issues) you rarely see nominal and purchasing parity exchange rates equal.

A fundamental in economic theory is that nominal exchange rates will move to match differences in interest rates. For example, say the average interest rate from US banks on US dollars is higher than that of Euros. In this scenario, you as an investor might want to sell your euros and buy dollars, so that you can get a higher interest rate on your savings.

This has happened over the past few years. In fact, it's one of the reasons that central banks change interest rates. By lowering interest rates, the central bank can reduce the value of its currency, making it more attractive for foreign companies and countries.

Certainly, the European Central Banks has been most vocal in insisting that low eurozone interest rates are meant to lower the value of the euro. This is intended, in theory, to make the local economy expand. The lower exchange rate makes exports cheaper and imports more expensive, which should stimulate local production and business.

A shareholder is an individual, company, or entity that holds a share of stock in a company. As a result of ownership, some shareholders are entitled to vote on how the company operates.

A W-9 is a tax form U.S. businesses use to collect information from independent contractors in order to accurately report payments to the Internal Revenue Service.

In accounting, goodwill is an intangible asset recorded when one company buys another for more than its fair market value.

Mutual funds give people a way to invest in a diverse mix of stocks, bonds, or other securities by buying shares of a larger pool that’s managed by a professional.

If you die without a valid will, you die intestate, and a probate court may distribute your assets to your heirs according to the state’s intestate succession laws.