A Roth 401(k) is an employer-sponsored retirement account that you can contribute to with after-tax income and receive employer contributions. 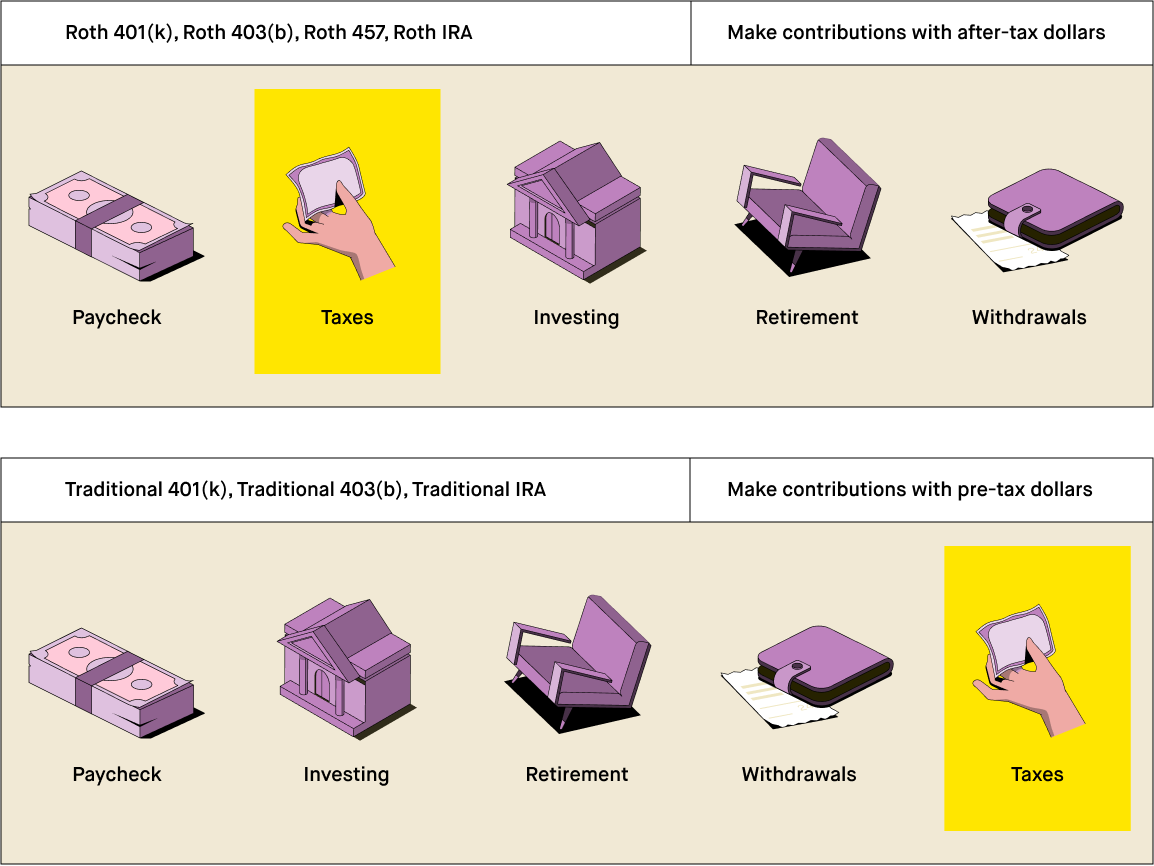 A Roth 401(k) is an employer-sponsored retirement plan that you can contribute to with after-tax dollars. It is like a combination of a traditional 401(k) and a Roth IRA. As with a Roth IRA, you pay taxes up front. Withdrawals in retirement are generally tax-free. The tax rule might sound like a bad deal at first glance, but it might be advantageous if you think you’ll be in a higher tax bracket when you begin to withdraw from your retirement account. Roth 401(k)s have many similarities to traditional 401(k), such as the contribution limit and the potential ability to receive matching contributions from your employer.

Let’s say Beth earns $3,000 per month and decides to contribute to her company’s Roth 401(k) plan. She contributes 10% of her salary, for a total of $300 per month. Beth has already paid taxes on the money before making her 401(k) contribution, meaning the $300 takes up a more significant chunk of her paycheck. But because she’s paid income tax on the money before putting it into her retirement account, any potential investment returns will grow tax-free (there are some minimum conditions), and she won’t have to pay taxes on it when she begins to withdraw from her account when she retires. She’s paying a little extra now to potentially save herself money in the long run.

What is the history of Roth 401ks?

Traditional 401(k) plans date back to 1978 when Congress passed the Revenue Act of 1978. In that bill, Congress added Section 401(k) to the Internal Revenue Code. Congress initially created the section to apply to deferred compensation, and employers quickly adopted it for tax-advantaged retirement accounts that we now know as 401(k) plans. The Internal Revenue Service (IRS) updated the 401(k) rules in 1981 to allowed employees to contribute to their 401(k) plans through salary deductions.

Roth 401(k) plans didn’t appear until many years later. In 2001, Congress passed the Economic Growth and Tax Relief Reconciliation Act of 2001 (EGTRRA). President George W. Bush signed the bill into law. The bill was a huge piece of tax reform that made changes to the tax brackets and tax rates, among other things. The act also created the Roth 401(k) and allowed employers to begin offering these plans to their employees on January 1, 2006.

As of 2019, about 50% of employers that sponsor a retirement plan for their employees offer a Roth 401(k), according to one study. Large employers with more than five hundred employees are most likely to offer a Roth 401(k) plan — 61% do as of 2019 — while only about 44% of those who employ between five and ninety-nine employees do.

A Roth 401(k) is a retirement plan that allows you to contribute to your retirement savings with after-tax dollars, avoiding taxation on the potential growth of your investments inside the account during retirement. When you contribute to your Roth 401(k), you pay income tax on the money before it goes into your Roth 401(k). Then, the money has the opportunity to grow in your account, and (there are some conditions) you can later withdraw your earnings without paying taxes on them.

Your employer can also match contributions to your Roth 401(k), though this match will be in the employee’s traditional 401(k) account. A 2019 study shows that 85% of retirement plan sponsors offer some sort of match to their employees. Often this will look like your employer matching your contributions up to a certain percent. For example, imagine you make $50,000 per year at your job. Your employer offers a Roth 401(k) plan where they match your contributions up to 4% of your income. Therefore, if you contribute at least $2,000 to your 401(k) plan in a year, your employer will contribute $2,000 to your traditional 401(k).

If you really don’t want and don’t need to begin withdrawing from your Roth 401(k) by the age 72, it is possible to roll your Roth 401(k) into a Roth individual retirement account (IRA) and eliminate the need to withdraw. There are downsides to this option as well, though. Federal law protects 401(k) funds from creditors. An IRA might not have those same protections. Consult a tax professional before making this decision.

The Internal Revenue Service (IRS) also has special contingencies for those who are nearing retirement and might need to catch up in their retirement savings. For employees age 50 and older, the contribution limit increases by $6,500. So those age 50 and over may contribute a total of $26,000 to their Roth 401(k) each year, as well as receive an employer match.

So what is the ideal amount to contribute to your Roth 401(k)? In a perfect world, everyone would be able to contribute the full $19,500 (or $26,000) that the IRS allows to gain the maximum tax benefit in retirement. But for many people, that’s too large of a financial burden. If you can’t max out your retirement contributions, aim to contribute at least as much as your employer will match. Your employer match is essentially free money, and it’s best not to squander that opportunity.

What are the advantages and disadvantages of a Roth 401k?

The tax rules for Roth 401(k) plans are especially beneficial to anyone who anticipates being in a higher tax bracket when they retire than they are as they’re contributing to their Roth 401(k). And though it’s impossible to know whether you’ll be in a higher tax bracket after you retire, most of us will probably have fewer options for increasing our income in retirement. So the tax break could be coming at an ideal time.

A Roth 401(k) might also be a disadvantage if you pay a higher tax rate now than you expect you will in retirement. With a Roth 401(k), you pay taxes before you contribute your earnings to your retirement plan. With a pre-tax plan like a traditional 401(k), you pay income taxes when you withdraw the money. If you’re in a lower tax bracket when you’re retired than you are now, you might pay less in income taxes down the road than you would today.

Finally, Roth 401(k) plans have strict withdrawal rules. With an employer-sponsored Roth 401(k) plan, you have to begin withdrawing when you have reached age 70 1/2, but there is no maximum age for a Roth IRA.

What is the difference between a Roth 401k vs. a traditional 401k vs. a Roth IRA?

Another option for saving for retirement is an individual retirement account (IRA). A Roth IRA, as with a Roth 401(k), requires that you pay income taxes on the money before you contribute it to your account. Then, the money grows in the account, and you won’t pay taxes on your earnings. The Roth IRA is a very different account than the 401(k). The Roth IRA is for individual retirement savings, meaning you open and run this account yourself. The contribution limits for Roth IRAs are much lower than a 401(k). As of 2020, the contribution limit is $6,000. Individuals over the age of 50 can contribute an extra $1,000 to help them catch up — this brings their total contribution limit to $7,000.

It is also worth noting that Roth IRAs have income restrictions — The income limit for contributing the maximum to a Roth IRA for singles will be $124,000 in 2020; for taxpayers married filing jointly it will be $196,000 in 2020. (Though you can get around these limits with what’s called a backdoor Roth IRA, where you contribute to a traditional non-deductible IRA and then immediately roll the contribution over in a Roth IRA). Roth 401(k)s, meanwhile, have no income restrictions.

There isn’t one type of retirement account that is inherently better than the others. They all have pros and cons. It just comes down to determining which is the best option for you.

Can you contribute to both a Roth 401k and a Roth IRA?

You could also elect to contribute to a Roth 401(k) plan through your employer and opt for a traditional IRA instead of a Roth IRA. What would be the benefit of this? Why not just opt for the Roth IRA? It’s likely impossible to know today what tax bracket you will fall into when you’re retired. You might be at a higher tax bracket in retirement, in which case it would be helpful to have Roth retirement accounts. But you also might be in a lower tax bracket, in which case it would be more beneficial to pay the taxes later.

Using both Roth and traditional retirement accounts allows you to diversify your retirement strategy a bit. You’ve already paid taxes on some of your retirement funds, but not all of it. So whether you fall into a higher or lower tax bracket in retirement, you’ve spread out your tax liability a bit more evenly.

What is a Health Reimbursement Arrangement (HRA)?
Updated October 14, 2020

A health reimbursement arrangement (HRA) is a type of employer-sponsored health benefit where the employer reimburses employees for the medical he or she incurs.

What is Qualitative Analysis?
Updated February 15, 2021

Qualitative analysis refers to using non-numeric information to assess a situation, a company’s value, a product’s quality, or anything else.

A bridge loan is a type of short-term loan a borrower might use to help fund a new purchase before they get rid of an existing loan.

What is Accrual Accounting?
Updated September 21, 2020

Accrual accounting keeps track of revenue and expenses in the same accounting period that the business activity which generated them occurred — regardless of whether cash has been exchanged yet.