Subrogation is when one party (usually an insurance company) claims the legal right of another party to seek reimbursement for losses they have paid. 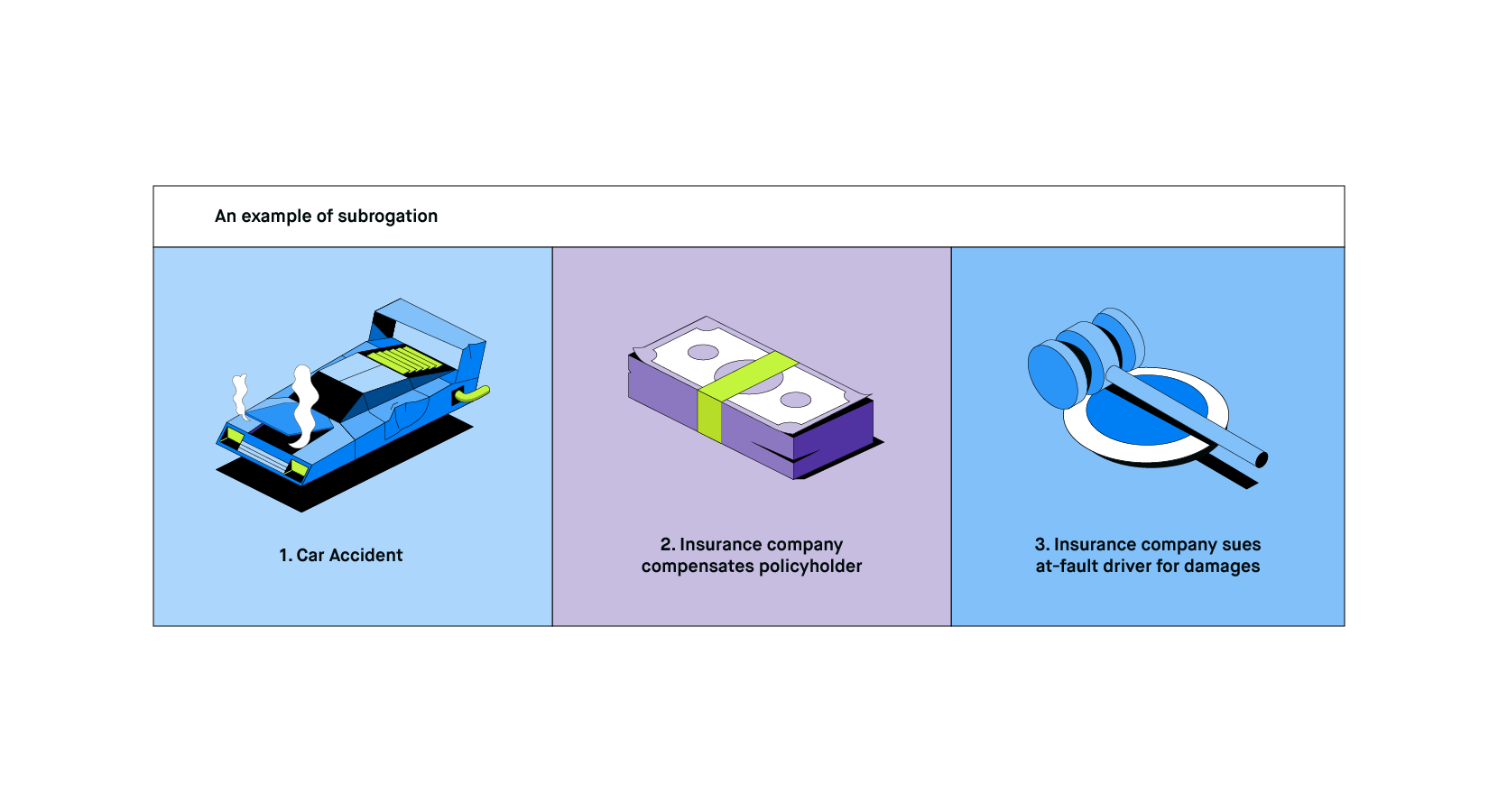 Subrogation is a legal right held by entities such as insurance carriers to recover their loss for damages caused by a third party. After compensating the insured for damages under the insurance policy, the insurer can try to recover their own losses. Subrogation allows them to step into the shoes of their policyholders and grants them the same legal rights as the injured party to pursue a loss. Many insurance policies include a subrogation clause, where you give your insurer permission to file such a lawsuit. Insurance companies take on a certain amount of risk with each customer they take on, and subrogation is one way they balance out that risk.

Your insurance compensates you in case of a loss, but subrogation gives them the right to recover their own losses if someone else should really be liable for the incident in question.

How does subrogation work?

The subrogation process usually begins when an insurance company compensates a policyholder for a loss the policyholder incurred at the hands of a negligent third party. The insured has filed a claim, and the insurer has fulfilled their end of the bargain by paying them.

But because the loss was the result of a third-party and not the policyholder, the insurance company seeks reimbursement from the at-fault party.

Here are some examples of the types of insurance policies that might include a subrogation clause:

The subrogation process for the insured

If you’ve been in an accident where you weren’t at fault, and your insurance has compensated you, there’s not much you’ll need to do for the subrogation claim.

In this type of situation, you’ve already recovered your losses. Now your insurance company is trying to recover their losses.

One other situation that can arise is if an insured party chooses to sue the third party themselves — the insurance company can then claim part of any cash settlement as part of their right of subrogation.

A waiver of subrogation is a contract that waives the right of an insurer to try to recover their losses when a third party is at fault.

This type of waiver is common in a construction contract or a lease. An insurer would also likely charge you an extra fee if you’ve signed this type of waiver because it puts them at a higher risk of losing money in the event of an insurance claim.

Why is subrogation important?

As a consumer, you might be wondering why subrogation is important and why you should care about it. After all, the subrogation process begins after you’ve already recovered your losses. So how does this benefit you?

Insurance companies (and companies in all industries, for that matter) often pass their expenses along to consumers. So if insurance companies aren’t able to recover their costs when a third-party is at fault, they would pass those extra costs onto their policyholders.

How long does insurance subrogation take?

The amount of time it takes to settle a subrogation claim can vary quite a bit from case to case.

In very straightforward cases where the at-fault person (or their insurance company) agrees to accept fault, subrogation claims can wrap up within 30 days or so.

For more complicated claims, the process can take years. This might be the case if the parties disagree about what happened and there’s no way to prove fault one way or the other.

If the parties can’t settle the issue themselves, the situation might require litigation (where one party takes legal action against the other).

What happens if a subrogation claim is ignored?

If someone ignores a subrogation claim at first, the insurance company seeking recovery of damages will probably continue to reach out and send subrogation letters.

But if someone is facing subrogation for an accident they caused, they shouldn’t expect the insurance company to go away if they ignore them.

If the case does end up in a lawsuit and the party being sued doesn’t believe they’re at fault, they’ll have the opportunity to prove that in court. Otherwise, they very well might end up having to pay damages.

How do I handle a subrogation claim?

If you’re found to be at-fault in an accident, it’s possible to end up with a subrogation claim against you. If the insurance company has paid out for a claim from their customer, they may come after you to recover their losses.

If that happens, you’ll receive a letter or phone call informing you of the subrogation claim.

These subrogation claims are most often handled between insurance companies, meaning your insurer might handle things on your end.

If you don’t have insurance, though, the claim will be against you directly. In that case, you’ll have to either prove that you weren’t actually at fault or you’ll have to pay the subrogation damages.

What subrogation mistakes should I watch out for?

What is Demand-Pull Inflation?
Updated October 16, 2020

Demand-pull inflation refers to goods and services getting more expensive because consumers have more money.

What are Marketable Securities?
Updated February 22, 2021

Marketable securities are short-term financial instruments (like a bond, stock, or Treasury bill) that can be converted into cash quickly.

A bridge loan is a type of short-term loan a borrower might use to help fund a new purchase before they get rid of an existing loan.

Insolvency occurs when a legal entity has more debts than assets or can’t pay off debts on time.