What is a Corporation?

A corporation is an organization of people that is legally distinct from its owners. 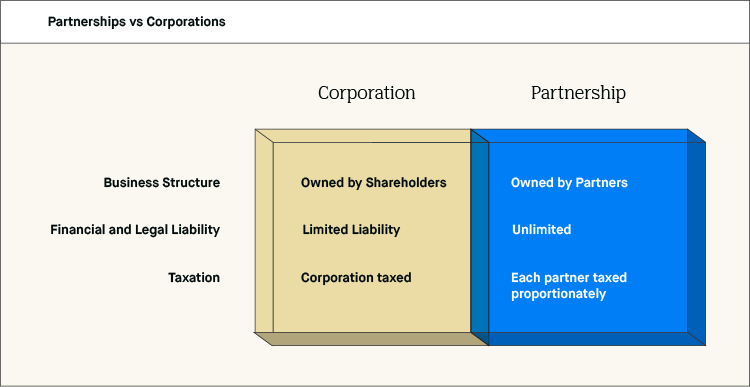 A corporation is a group of people legally treated as a single, separate entity. A corporation has many of the same rights and responsibilities as individual people. Corporations can borrow money (and are responsible for paying it back), enter into contracts, engage in commerce, sue others, and even be sued themselves. Corporations can sometimes offer certain legal protection to their owners, who are generally liable for nothing except their investment.

Many of the companies people are familiar with are either considered corporations themselves or are part of a corporation. For instance, Google is a subsidiary company of a corporation called Alphabet Inc. Google is also a good example of the fact that the name you know a company by isn’t always the legal name of the corporation.

Both are groups of people that can be thought of as a specific entity and only exist because of societal systems. And of course, it’s one of these fictitious entities that gives rise to the other. We all agree to believe in the United States of America, and the US decides certain other groups of people are entities called corporations.

How is a corporation formed?

When a business wants to incorporate, several things need to happen. It must:

The steps of this process can vary depending on the state or jurisdiction where the corporation is being formed.

There are other common steps, such as creating bylaws and drafting a shareholders’ agreement, but these are not often requirements.

How does a corporation work?

This is in contrast to other forms of ownership. A sole proprietorship is one of the simplest and least costly ways to organize a business that has one owner, but that owner faces unlimited liability for the actions of his or her business. This means that if the sole proprietor is unable to pay off their business loans, their personal assets may be in danger of being seized.

Similarly, in a partnership (an unincorporated business with more than one owner), the owners have both legal and financial responsibilities and are personally accountable for the actions and debts incurred by the business. There are certain forms of partnerships called limited partnerships that do provide a level of legal protection.

Both sole proprietorships and partnerships can avoid paying income tax directly. The IRS lets them “pass-through” profits to their members, and the money is taxed only at the level of the income of the individual owner.

There is a business structure called a limited liability company (LLC) that combines the legal protection of a corporation with the opportunity to experience “pass-through” taxation in the manner of a sole proprietorship or partnership. LLCs carry their own disadvantages, such as the fact that certain states may elect to dissolve an LLC after the death of an owner, whereas a corporation is allowed to exist forever.

What are some of the different types of corporations?

C-Corporations have to pay corporate taxes on their profits. These taxes are paid before the C-Corp can issue dividends to its shareholders.

In contrast, S-Corporations can avoid paying federal corporate taxes. Not every company can become an S-Corp. However, there is a requirement that there be fewer than 100 owners, and there are limits on who can be an owner. To be considered an S-Corp, a business can only have one class of stock.

While S-Corporations can avoid federal income taxes, whether they pay corporate income taxes on a state and local level depends on their location. For instance, in New York City, an S-Corp is on the hook for the local corporate tax rate of 8.85%, except on revenue generated outside the city.

Because of the specific ownership requirements of forming an S-Corp, it is much easier for a small business to qualify. Publicly-traded corporations can have thousands of owners and are thus not eligible to file for incorporation under subchapter S of the IRS code and must incorporate as a C-Corporation.

What are some advantages of corporations?

One of the most notable advantages of forming a corporation is the opportunity for the owners to have limited liability.

Under a sole proprietorship, the business is not considered a separate legal entity from the owner. This means that the owner is entirely responsible for the business’s liabilities and debts. It also means that the owner can possibly put their personal assets at risk if their business goes into debt. This is because, legally, there is no distinction between themselves and their business.

What are some disadvantages of corporations?

One of the most notable disadvantages of corporations is what is known as “double taxation.”

Double taxation happens when a corporation is required to pay corporate income tax on profits before they can distribute those profits to shareholders in the form of dividends. Once they do distribute dividends, the owners are subject to paying taxes on them, meaning the money was taxed twice.

There are ways S-Corporations can avoid this situation at the federal level and sometimes on the state and local level, too. However, the rigid requirements for filing under subchapter S can be a disadvantage that limits the corporation’s ability to receive funding.

What is the difference between a corporation and a company?

In the US, the term “company” can have a generic meaning that is roughly similar to terms such as “business,” “organization,” and “firm.” It can also sometimes have a technical definition, as is the case with the limited liability company, or LLC.

The term “corporation” is most commonly used in its technical sense and refers to a business that has incorporated and has the legal designation of a corporation. These businesses use the suffix “Inc” (which stands for “incorporated”) in their registered names.

In the formal sense, corporations and limited liability companies are similar; they are both legal designations that treat groups of people as a single, distinct legal entity. They also both provide legal protection against business owners being liable for the firm’s actions and debts.

In the general sense of the word, a corporation would be considered a type of company. It would not be uncommon to hear a business that had the structure of a partnership be described as a “company.” Sometimes, businesses that are operated by sole proprietors might be referred to by their owners as their company.

How does a corporation end?

A corporation can end either voluntarily or involuntarily. A voluntary end could mean that the organization has decided that it has met its objectives and no longer needs to continue existing. An involuntary end often occurs when an insolvent (insolvency is the inability to pay money that is owed) corporation is no longer able to keep up with its obligations to creditors, resulting in a possible corporate bankruptcy. There can be other forms of involuntary endings, such as a court order for the business to dissolve.

In either case, the corporation will liquidate its assets, pay off any remaining debt holders, and distribute what is remaining to shareholders.

Disclosures: Information presented here is for informational purposes only and is not to be construed as tax or investment advice. Further, the mention of individual companies is not a recommendation to transact in any security.

An interest rate is what the lender charges for the use of its assets, such as cash, a vehicle, or property, shown as a percentage of the principal, the amount borrowed.

A stock, otherwise known as “shares” or “equity,” is a unit of ownership in a company, entitling the stockholder to a piece of a company’s assets and revenue.

What is a Financial Institution?
Updated July 13, 2020

A financial institution is a company or that provides financial services to customers and facilitates transactions between parties.

Audits are an official investigation of a person’s or company’s financial statements to ensure they are accurate.

A patent protects the rights of inventors by preventing others from replicating their invention.

A credit score is a number assigned to an individual by businesses called credit bureaus, that lenders use to gauge the likelihood that an individual will default on a loan.