What is Market Capitalization?

Market capitalization (aka “market cap”) is one way to measure the size of a company by multiplying its total number of shares by its stock price. 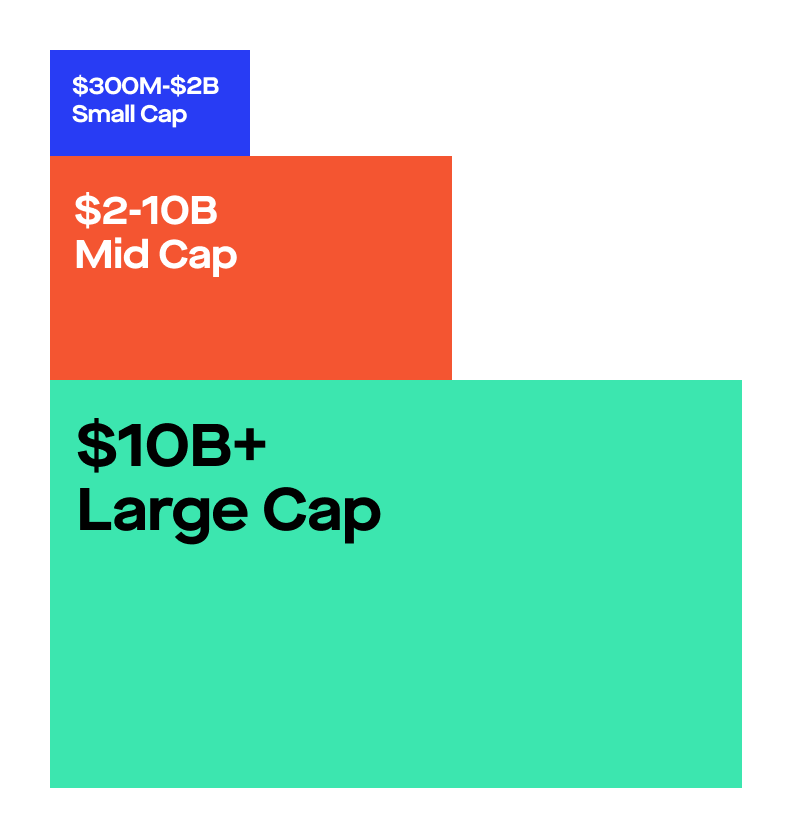 Market capitalization shows the dollar value of a company’s outstanding shares. To get this number, you multiply the company’s total number of shares by the price of each share. As the price of the stock changes (or the number of shares outstanding changes), so will the company’s market cap. Companies can be sorted into three market cap categories: “small cap” ( $300M–$2B), “mid cap” ($2B–$10B), and “large cap” ($10B+).

Apple became the first company in history to reach a $1 trillion market cap on August 2, 2018. Doing the math: Its nearly 5 billion shares * the $207.05 share price it hit that day = $1 trillion. Since then, Amazon and Microsoft have also joined the “four comma club.”

Calculating market cap is like calculating the value of fruit on a pallet...

How is market cap calculated?

You only need two numbers to calculate a company’s market cap: the total number of outstanding shares of a company — including those held by officers and insiders, as well as people like us who own shares — and the real-time price of that stock. Because the share price of private companies isn’t publicly known, market cap is typically used in reference to publicly traded stocks. The simplicity of the market cap formula makes it a convenient way to quickly judge the size of different companies. But there are also more nuanced ways to value a company.

While small, mid, and large are the most traditional categories, labels have been made for the extremes as well:

What is the difference between market cap and market value?

Want to know how much a company can be sold for? That’s its market value — the value that the company is worth in the market.

For public companies, one way to estimate its value is by calculating its market cap.

Even for public companies, it can be a challenge to estimate market value (i.e. what another buyer would actually pay for it). While market cap is one way to estimate, there are many other methods used. Some include pretty intense accounting, taking into consideration a company’s debts, growth prospects, taxes, and more. These estimates sometimes incorporate more fuzzy analysis, too — for instance, a company’s ability to innovate and broader trends in the relevant industry. Some approaches are more formula driven and use mathematical equations to estimate value. For example, multiples let you take one known metric of a company and turn it into an estimated market value.

Why do market caps matter?

Market cap can be helpful to investors for two main reasons:

A stock split occurs when a company wants to decrease the price of its stock — So, the company splits its shares into multiple, smaller ones. (It’s like cutting a pizza into 8 slices vs. 4 — the size of the pizza hasn’t actually changed.)

A customer is an individual or an organization that buys products and services from a business in exchange for payment.

What is Pre-Foreclosure?
Updated September 22, 2020

Pre-foreclosure is the period starting when the mortgage lender notifies the borrower of their intent to foreclose — and typically ending when the lender has taken possession of the property.

What is Stock Dilution?
Updated September 09, 2020

A subprime mortgage is a type of mortgage with a high interest rate that lenders usually offer to borrowers with poor credit.

For individuals, income is the money they earn from working, or the returns from their investments. For businesses, it's what’s left of their revenue after expenses.

What is an American Depository Receipt (ADR)?
Updated June 18, 2020

American depository receipts (ADRs) represent shares in a foreign company that can trade on US stock exchanges –- US banks buy foreign stocks and reissue them as ADRs.