What is Purchasing Power Parity (PPP)?

Purchasing power parity (PPP) is an economic metric that compares the standard of living between two countries by weighing the amount of each currency needed to buy similar goods. 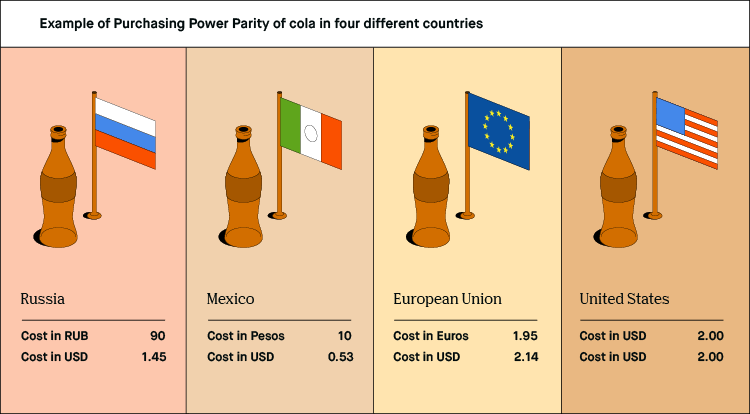 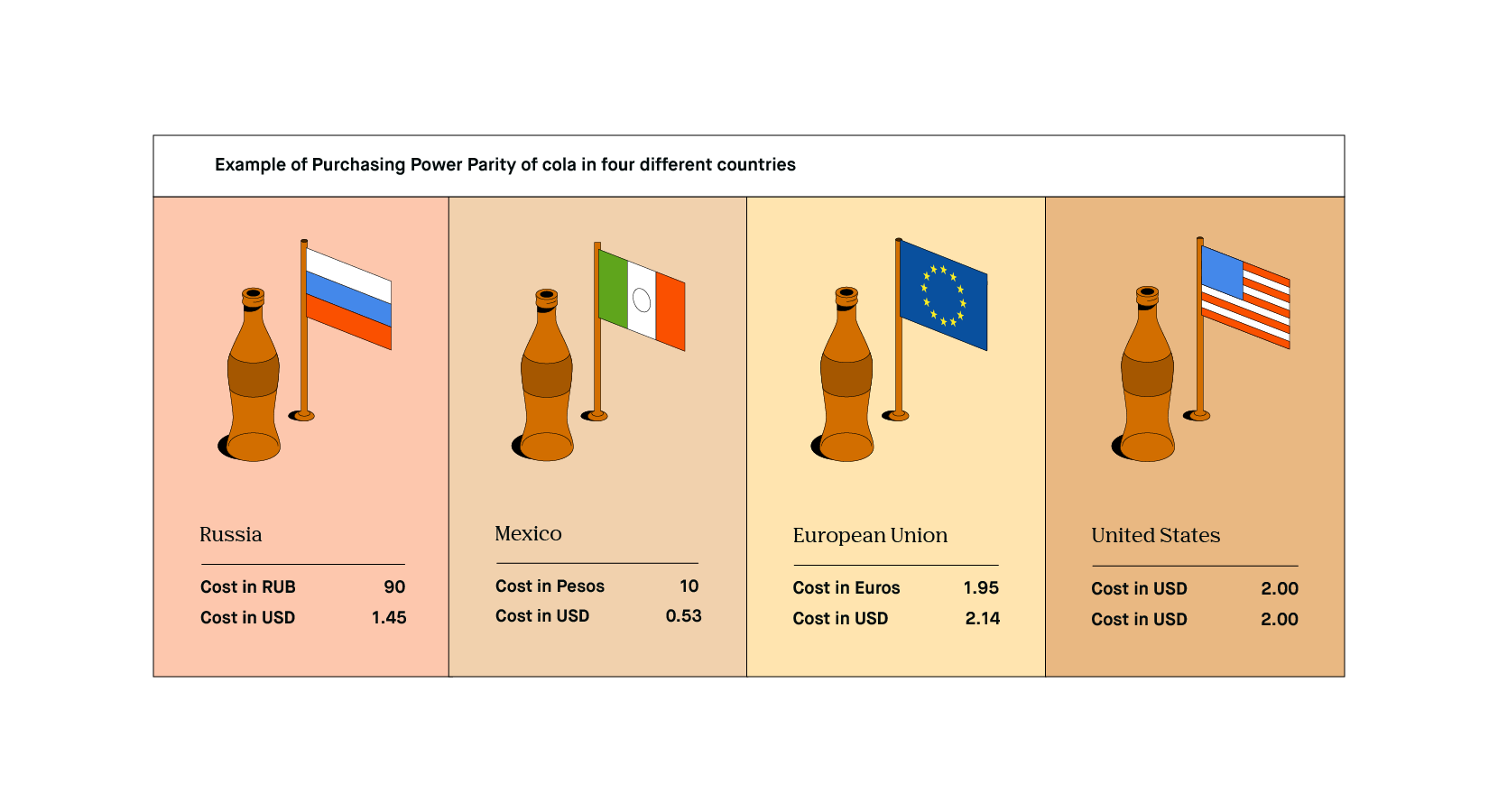 Purchasing power parity compares the relative value of two countries’ currencies based on the cost of goods in each nation. Products have different prices depending on where they’re sold, and it can be challenging to understand the true variation in cost since different currencies are involved. Purchasing power parity is designed to reduce that difficulty and compare the standard of living between two countries by evaluating the relative cost of a basket of similar goods.

A well-known example of purchasing power parity is The Economist’s Big Mac index. This index, which looks at the average price of a McDonald’s Big Mac sandwich in different countries, is a tongue-in-cheek way of comparing the relative value of nations’ currencies.

For example, the January 2019 Big Mac Index showed that a Big Mac cost, on average, £3.19 in the UK and $5.58 in the US. Since the ingredients are virtually identical, this implies that the exchange rate at the time should have been £0.57 to the dollar. The actual exchange rate, however, was £0.78 pounds to the dollar.

Purchasing power parity is like comparing apples and oranges…

Both of them are fruit, but it’s hard to get a direct comparison because they’re so different. In the same way, currencies differ widely while serving the same purpose: paying for goods and services. PPP gives people a way to compare the value of two wildly different currencies.

What is purchasing power parity (PPP)?

Purchasing power parity (PPP) is a metric that lets people compare the relative standard of living between two countries based on the cost of similar goods, after accounting for currency values.

If an imaginary product costs $1 in the United States, and ¥200 in Japan, one would expect the exchange rate to be $1 to ¥200. In reality, the currency values suggested by PPP don’t necessarily match the exchange rates currencies actually trade at. PPP has limitations, and the values it suggests are useful benchmarks, but ultimately theoretical.

Since using just one item (even a Big Mac) can skew PPP, most calculations use the prices of many products, called a basket of goods. The basket of goods might include a gallon of gas, a pound of rice, a kilowatt of electricity, a one-bedroom home, and a meal at a fast-food restaurant. The Organization for Economic Cooperation and Development includes more than 3,000 items in the basket of goods it uses to calculate PPP. As more goods are added, the potential for error or large fluctuations drops.

Why is purchasing power parity important?

Purchasing power parity is relevant, because it gives people a way to compare the economic output and standard of living in two countries.

Countries usually calculate gross domestic product (GDP) in the local currency. The US reports GDP in dollars, Germany reports in euros, Japan reports in yen, and so on. Using purchasing power parity lets you accurately compare the GDPs of different countries. The market value of currencies fluctuates regularly, but PPP is more steady because the prices of goods in most countries move more slowly than exchange rates. By using the conversion rate that PPP suggests, analysts can produce a more accurate comparison of two nations’ outputs.

PPP is also popular among Forex traders who want to find currencies that are undervalued or overvalued. If PPP calculations produce a relative value between two currencies that wildly differs from their market exchange rate, that can indicate that the market has priced those currencies incorrectly. For example, if PPP calculations show the conversion rate should be $1 to ¥100, but the market rate is $1 to ¥150, that can indicate that the yen is undervalued and may be a good currency for traders to buy. If calculations show the conversion rate should be $1 to ¥200, the traders might want to sell or short the yen because it may be overvalued.

Governments also use PPP to look for currency manipulation from other countries. Nations that have firm central control over their economies may use economic levers such as changing interest rates to influence exchange rates, or even mandate specific exchange rates. PPP can help other countries uncover this manipulation and provide a more accurate estimate of a currency’s real value.

How is PPP calculated?

The formula for calculating purchasing power parity is:

What are relative and absolute PPP?

Absolute PPP is the theory that the prices of two goods in different countries should be identical after controlling for currency values. If a Big Mac costs $6 in the US and £3 in the UK, then the exchange rate should be $.50 to £1. If this is true, the two currencies are said to be at absolute PPP.

Absolute PPP most often occurs for commodities that are easy to transport, like wheat. Goods that are difficult to haul or scarce in certain parts of the world rarely experience absolute PPP, because transportation costs and scarcity drive up the price.

What is the PPP by country?

Purchasing power parity is a comparison between two countries’ currencies, so the PPP of a country will vary depending on which other country and currency you’re comparing it to.

Organizations like the World Bank regularly publish lists of countries’ GDP, adjusted for PPP. Usually, the US dollar is the base currency for these lists because it’s the world’s most popular reserve currency. Sometimes, the figures are listed in “international dollars,” which is really another way of measuring against the US dollar.

What are the limitations of PPP?

Purchasing power parity is helpful, but it also comes with limitations. Namely, it fails to consider:

PPP assumes that the same good in different countries has the same inputs (raw material and labor) and transport costs. But countries have different geographies and population densities, which affect transport. For instance, a place like Canada, with a widely dispersed population, will likely have higher transportation costs (including fuel, shipping, and handling) than a dense country such as South Korea. Countries that have a difficult geography, such as many islands or mountains, may incur higher transportation costs as well.

PPP compares the prices of two baskets of goods but does not examine the quality of the products being compared. Higher-caliber goods demand higher rates, so if one country tends to have better quality goods available, that will affect the PPP calculation because goods will cost more. Nations with lower quality goods will likely have lower costs to compensate.

Every country has a tax system, which plays a significant role in the price of goods and services. Products will cost more in countries that charge higher levels of taxes, which can throw off PPP calculations. Tariffs on imports can have a similar effect by raising the cost of goods, while subsidies can lower the cost.

The cost of goods and services is affected by the value of labor. For example, a country’s prevailing wage for cooks and wait staff will affect the cost of fast food or a restaurant meal. In a country where wages are higher, meals will cost more. PPP also doesn’t account for other fees, like insurance, which can impact the price of goods.

Natural gas liquids, or NGLs, are petroleum products that have fewer carbon atoms than crude oil, but more than natural gas.

Liquid assets don’t have anything to do with water: they’re ones that can quickly and easily turn into cash.

What is Monopolistic Competition?
Updated September 30, 2020

Monopolistic competition is a market structure where firms compete for market share, yet have some pricing power due to perceived quality differences and branding.

A monopoly is a business that dominates a market with little or no challenge from competitors, and thus can do as it pleases in setting prices and producing its goods.

What is Vertical Integration?
Updated June 18, 2020

Vertical integration is when a business serves as part of its own supply chain — the path that raw materials and goods take when flowing from the supplier to the retailer to the end consumer.

A country’s Gross National Product, or GNP, is the value of all the things a country’s citizens create in a year — regardless of whether it happens within the country's borders or not.